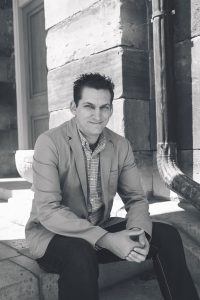 I began IroquoisCounty.tv because I felt a need for encouragement in my own life. I needed some reminders of why I live here and what I love about Iroquois County, and I wanted to share those reminders with my community.

Center Street Productions is located at 108 W. Walnut St. in Watseka, IL and provides custom video for business and organizations in Illinois and across the U.S.

Phil Gioja, owner & video producer, graduated with a B.A. in Cinema and Photography in 2004.

Phil focuses on video for business & organizations, and has experience in a broad range of fields including manufacturing, agriculture, construction, pharmaceuticals, and more. He looks forward to the unique challenges of each new project and creating videos that communicate effectively.

• Have been integral in the launch of www.PlanetUnderground.tv

• Have provided videography for Caterpillar & Cat dealers across the country

• 2014 film “From Chains to Freedom” won honorable mention for Best Documentary at the 2014 International Christian Film Festival in Orlando, FL

Phil and his wife Laura are the proud parents of two beautiful daughters and a high-energy son, and have made Watseka, IL their home since 2009.